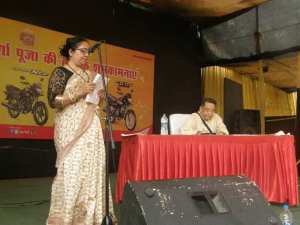 This year, for the first time in my life, I participated in the Abriti (Bangla poetry recitation) competition at Timarpur Durga Puja. I won the 2nd prize! My poem was ‘Swapne’ from Tagore’s Sanchaita, a collection of original poems compiled by Tagore himself…The opening lines are,”Sundoro, tumi eschechile aaj prate/Orunboron Parijaat loye haate…” meaning, “O Beautiful One, you came today morning/blessing me with sunlight, sunflower in your hand…I understood this poem much better when I saw this tree in Timarpur standing so beautifully with a halo of sunlight. I just couldn’t resist taking its pic! Just click on the pic below. Really, without Sukhangshu’s help and encouragement this wouldn’t have been possible… 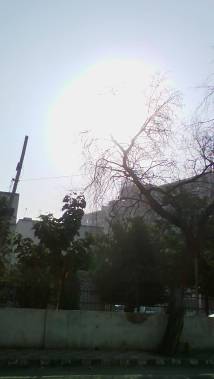 All writers at some point of their lives have tried to give their readers a glimpse of their inner worlds.

Here is my poem, “My Sweet, Lonely, Little World.” I wrote it in the 80s when I was a student in Delhi University.

First of all, I would like to thank Shampa for giving me an opportunity to discuss Tagore in this wonderful gathering. I feel both humbled and privileged as I talk about my journey through Tagore’s works before you today.

Before I carry on, I would like to mention that I began exploring Tagore on my own only very recently; my knowledge of Tagore, I must confess, is still very limited and I am still learning.  My early years of education were spent in Gujrat and Nigeria. I grew up in a different kind of a culture where Tagore was a distant, towering figure in world history, just like so many others who had achieved greatness during their lifetime. But that was all. He was like a star, someone we see only in the distant skies, not someone I could identify with, someone who could have a place in my heart, someone whose songs and poems could inspire me on and bring joy and happiness….

The first time I heard a Tagore song, other than the national anthem, was in 1984 when I was in my first year of college. I was sitting in the college canteen during recess time, alone, worried about my career, feeling very sad and depressed. I found my studies boring and I had no friends. I felt terrible and awful. I was thinking of going home and bunking my post recess classes. Suddenly a group of girls sitting close by, I think they were from the College Dramatic Society, broke out singing the song, “Ekla Cholo Re… Jodi thor dak shoone keu na ashi tobe ekla cholo re…

They sang it with so much feeling, so much sincerity that I was absolutely thrilled. Though I did not understand the lyrics at that time, I could guess from the word Ekla that it meant that you must keep moving on, even when you are alone, fumbling, and suffering…I found that really inspiring and I decided that some day I would learn to sing this song myself like those girls. This song worked like a soothing balm on my soul and I decided to stay and attend my classes. I dropped the idea of bunking my classes. Of course, what I did not know at that time was that one day I would learn that song after becoming Mrs. Chatterjee.

I got married in 1992 and for several years after that, like any other married couple, we too had to grapple with a lot of problems while settling down. Though I loved reading books, Tagore was not a very big priority.

In 2010, I began writing a short story “Opportunity Lost.” It took me 2 years to complete it. After completing it, I printed it and showed it to my husband Doltu. He has always been my worst critic and my best friend. My hands trembled and my heart beat fast as I watched him read it.  This story was based on my own life and it was about something that I had not told him earlier. I was worried about how he would react. But I was pleasantly surprised to see how touched he was. With wonderstruck eyes, he said, “This is a great story. You must write more and keep writing. One day we will get them published. But if you insert a song from Tagore, Ektuku chowa lage, ektuku kotha shuni, this story would become more poignant.”

Next day, I looked up the song in Google. It did seem to fit, so I copied and pasted the lyrics and fitted them into the story. Mili became Sharmila Acharya and Sanjay became Sujoy Sarkar. And then I realized that as a writer and a creator of these characters, I also ought to know how to sing the song. So I went on to learn the song from Google and with encouragement from Doltu and Shampa, I got the confidence to sing it in public too. I sang this song on Shampa’s 25th wedding anniversary…I still find it hard to believe because I have always been very shy and introverted. In other words, my journey through Tagore has transformed not only my story and its characters, but also my own life as a human being. I feel elevated to a higher level, higher consciousness every time I recite a poem of Tagore or sing his song.

Buoyed by my success with this song, I learnt to sing a few other songs too: Ekla cholo re (the one that I had always wanted to learn), Tobu mone rekho, Sedin dujone…I was amazed to find that a song was available in Tagore’s collection for every mood, every feeling, and every emotion and some of the old Hindi songs such as Nain Deewane have in fact been adapted from Tagore’s songs!

Let me sing a paragraph from each of these songs. Please forgive me if I fumble somewhere or make any mistake in sur or tal or pronunciation.

And now here is a poem from Tagore’s Gitanjali…

If baby only wanted to,
he could fly up
to heaven this moment.

It is not for nothing
that he does not leave us.
He loves to rest his head
on mother’s bosom,
and cannot ever bear
to lose sight of her.

Baby knows all manner
of wise words,
though few on earth can
understand their meaning.

It is not for nothing
that he never wants to speak.
The one thing he wants is to learn
mother’s words from mother’s lips.
That is why he looks so innocent.

Baby had a heap of gold and pearls,
yet he came like a beggar
on to this earth.
It is not for nothing he came
in such a disguise.

This dear little naked mendicant
pretends to be utterly helpless,
so that he may beg
for mother’s wealth of love.

Baby was so free from every tie
in the land of the tiny crescent moon.
It was not for nothing
he gave up his freedom.

He knows that there is room
for endless joy in mother’s little
corner of a heart, and it is sweeter far
than liberty to be caught
and pressed in her dear arms.

Baby never knew how to cry.
He dwelt in the land of perfect bliss.
It is not for nothing
he has chosen to shed tears.

Though with the smile of his dear face
he draws mother’s yearning heart to him,
yet his little cries over tiny troubles
weave the double bond of pity and love.

Before I end, I would like to emphasize that my journey through Tagore has only just begun and whatever I know today about him is only a fraction of the huge body of works he has left behind. Exploring Tagore is like navigating through the universe and my entire life will not be enough.

This site uses Akismet to reduce spam. Learn how your comment data is processed.