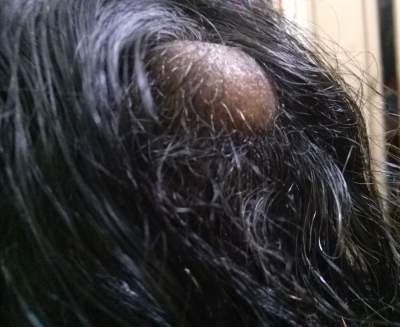 It was in January 2018 that I gathered sufficient courage to see a doctor for removal of my 40-year-old multiple sebaceous cysts on my scalp. As you can see in the pic above, they were now swelling and could no longer be ignored, so it was now or never.

The doctor exclaimed when he saw them and asked why I hadn’t come to him earlier. His advice was that although they needed to be removed at the earliest, they couldn’t be excised at one go as healing might be an issue. This implied that I had to go for a series of bloody excisions with very short intervals, each one to be done after the previous one healed completely. Each surgery involved partial removal of hair around the cyst.

This was, in fact, the main reason why I had been postponing this matter. If you have ever worked in the Indian private sector where jobs are never secure, you would know what I mean. Sometimes you get fired because of extremely flimsy reasons without getting any chance to explain.

Apart from my fear of losing my job, I had other apprehensions too. Having grown up as a Sikh, frequent removal of hair was not something I felt very comfortable about.

These surgeries could not be covered under insurance at a private hospital as they did not require overnight stay.

I was terrified initially, to be honest, because of the huge amount of uncertainty involved. I had never gone through anything like this before.

I chose DDU Hospital, Hari Nagar, for these surgeries, as it is near my home and it is a government hospital where all services are free. It seemed to be the only suitable option for us.

One big problem with a private hospital in India is that they look at you more as a goose that lays golden eggs and less as a human being in distress, requiring special care. You often end up with a huge bill with unforeseen hidden expenses. It is rather ironical that in India, even after paying more at a private hospital, there is no guarantee that you will get better medical attention. There is always a risk of things getting botched up.

In any case, in regards to surgeries, even the minor ones, my personal opinion based on years of experience as a Medical Rep. is that it is better to get them done in either government or charitable hospitals. Their doctors don’t have any vested interests and the diagnostic tests they prescribe are those that are absolutely necessary.

I don’t mean to say that there is no negligence at government hospitals and no one is greedy, but at least, people are accountable for their actions and you don’t have to sell off your property to get good quality treatment for your loved ones.

And these days, even the washrooms in government hospitals including DDU have undergone remarkable improvement. The flushes work and the sinks too look cleaner, generally speaking. This pic below is from inside a ladies washroom in the OPD section of DDU. If you have the older picture of the same loo in your mind from about 5 years ago, you probably won’t believe this! 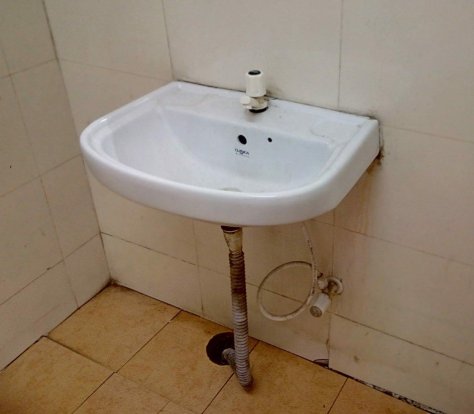 After completion of the sugar test and FNAC and receipt of their reports, which took about a week, I was asked to report at the minor OT for the first procedure on 6 February 2018.

On the D-date, 6 February 2018, I was outwardly calm, but I was trembling inside and my throat felt dry while the doctors worked on my head.

The surgery was done under local anesthesia and was over in a jiffy, to my pleasant surprise! I walked out with 2 cysts less; yes, two, not just one, as they were very close to each other. See my pic below…a big weight off my head, literally! 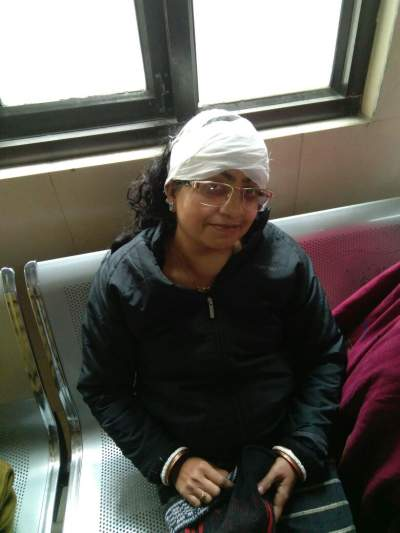 I had overheard a few fellow patients saying that these days, unlike previous years, the medicines that DDU doctors prescribe are available for free inside the hospital. But you need to stand in long queues. I visited the medicines counter myself and found that this was true indeed. (See the pic below). 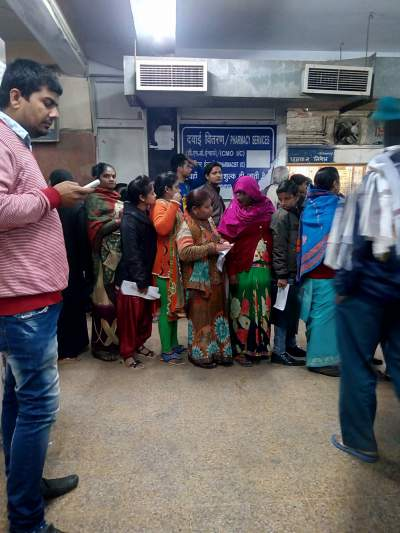 So I chose the more convenient option of purchasing the antibiotics and painkillers from the government’s subsidized medicines store right outside the OPD. The queue was not very long.

There were several banners right above the shop, each one displaying a beaming picture of Prime Minister Modi with his characteristic smile that we common people always associate with his elusive promise of ‘acche din’ meaning ‘happy days’ ahead. They seemed to be competing with smiling Kejriwals all over the place, promoting free medicines, diagnostic tests, and services for all….

A strip of Unomox (antibiotic medicine) normally costs around Rs.250 at an ordinary drug store, but I got the same medicine under a generic name from this place for just Rs.99!

See these pics below. 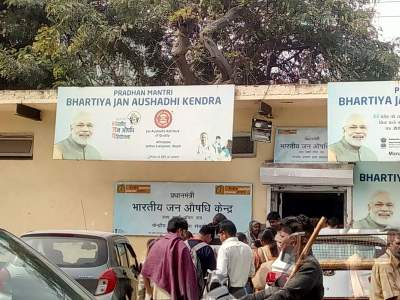 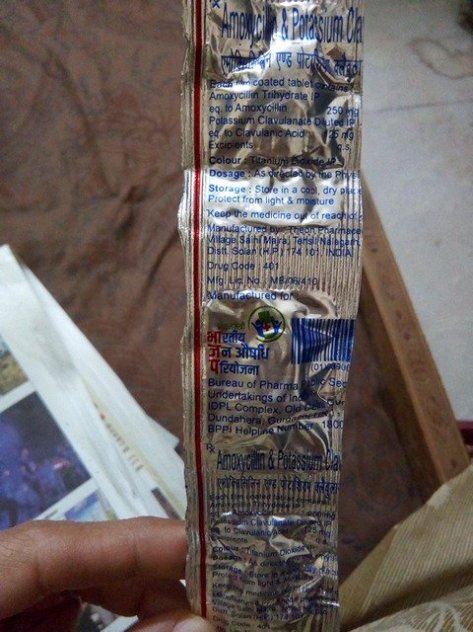 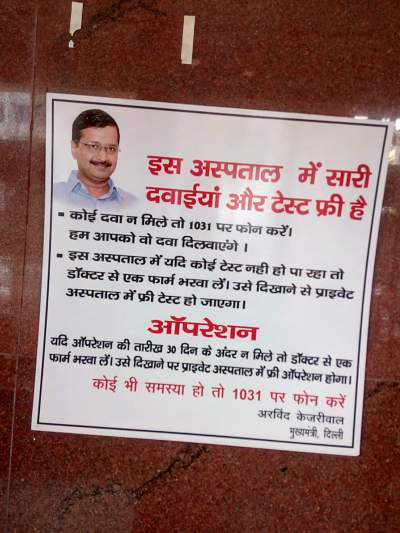 I found this rather puzzling. Surely, with a city bursting at its seams with huge manpower looking for government jobs, the government can always hire more people and increase the nunber of counters for dispensing of free drugs, can’t they?

My 21-year-daughter had this to say. “Mom, if they remove the queues at free medicines counters, no one will buy those medicines, not even those who can afford them. The government needn’t support those who are already better off.” I agreed with her on this.

Well, by the grace of God and my family’s loving care, which included change of bandages every night, my wounds healed fast. 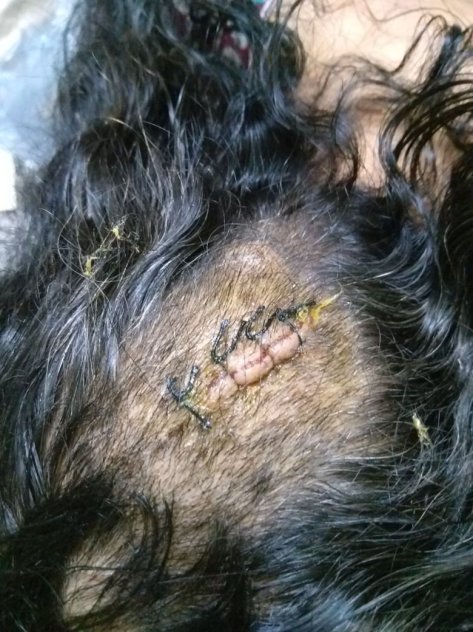 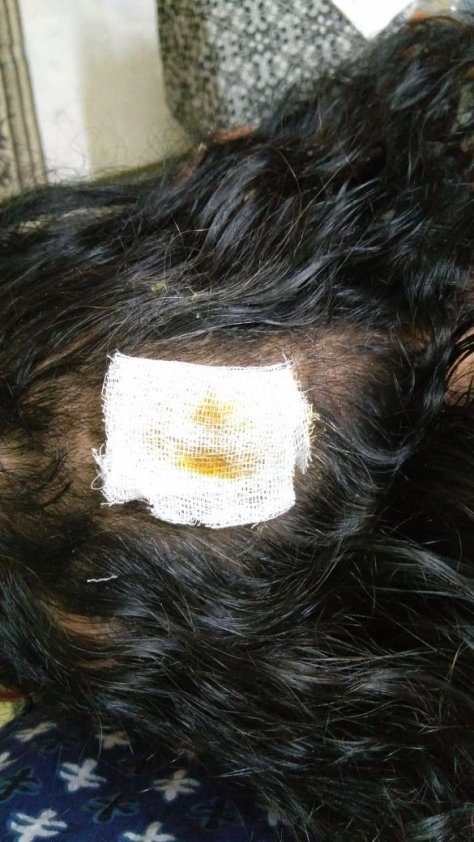 Three weeks later, I returned for treatment of the next cyst…I had already lost my job by then, which was what I had always dreaded. But I had another one in hand, so I was more relaxed this time. The road ahead appeared to be pretty familiar now. I hope to be cyst-free by the end of 2018…

I subsequently got my long-overdue cancer screening tests also done through this hospital through the Delhi Government’s DAK (Delhi Aarogya Kosh) scheme. That’s the scheme that the Kejriwal posters refer to regarding free medicines, tests, etc. All of my tests were done free. One of them, the mammogram, was done at a diagnostic center near my home as it could not be done inside the hospital.

Recently, there was a media report about an impoverished Bollywood actress’s appeal to the famous actor Salman Khan for financial help as she was ill with tuberculosis and didn’t have money for even a cup of tea!

I wonder if a well-wisher ever suggested to her to quietly check into a government hospital instead of demeaning herself the way she did. There is nothing wrong, mind you, in asking for help, but you should do that only when all other options have run out.

Our governments, both state and central, implement a lot of schemes to ensure that everyone has a decent, dignified life without having to beg anyone. But because of lack of awareness at the ground level, benefits of these schemes don’t always reach everyone that they are intended for.